Mehretu's new installation of richly layered drawings and monotypes, extending her dynamic exploration of the potential of drawing and mark making which are fundamental to her art.

Price
Free
What
Exhibitions and displays
Where
Kettle's Yard

Born in Addis Ababa, Ethiopia in 1970, and now resident in New York, Julie Mehretu is among the most highly regarded artists working today. A recent painting by the artist, Ghosthymn, was included in the exhibition Actions. The image of the world can be different, which marked the re-opening of Kettle’s Yard in 2018. Inspired by current world issues, her personal biography, and the history of abstraction, Mehretu’s powerful works interrogate the present with urgency and lyricism.

A new publication documenting the exhibition, including an essay by Kettle’s Yard curator Amy Tobin, will be available in February.

There is an extensive programme of events at Kettle’s Yard related to the exhibition. The full programme will be announced when bookings open on 30 November 2018.

To be the first to find out about future exhibitions and events, sign up to our email list.

Andrew Nairne on Julie Mehretu, part of the ‘Actions. The image of the world can be different’ book

In recent works by Julie Mehretu, the surface of each work is an animated mass of grey marks, lines, smudges and stains. There is no still centre: everything is moving, swirling, falling. It is as if we are engulfed in the immediate aftermath of an explosion, in the seconds before the detritus and dust settle to reveal a changed landscape. Mehretu’s rich and dynamic use of paint holds us there, in a suspended moment of shock and possibility.

The year 2012 marked a decisive shift in Mehretu’s work, it was no longer grounded in architectural renderings, but generated and abstracted from news photographs of particular global events and upheaval.

That we can follow the evolution of Mehretu’s painting over time and for it to speak to us in its semantic depth as we attempt to negotiate the complex dimensions of our present is proof of the force of her art. For it is not simply a matter of composition and gesture, contour and image, substrate and surface, brought together to produce the powerful aesthetic effect of her work. There is the emancipation of the act of making and the mindful intelligence of physical abandon that reflects a vital grounding in the world in which we recognise ourselves, and in which we participate. Suzanne Cotter, “The Alien Discontinuum: On painting and participating in the work of Julie Mehretu”, 2017

Julie Mehretu makes large-scale, gestural paintings that are built up through layers of acrylic paint on canvas overlaid with mark-making using pencil, pen, ink and thick streams of paint

In 2005 Mehretu was the recipient of the American Art Award from the Whitney Museum of American Art, as well as the prestigious MacArthur Fellows Award. In 2015 she was awarded the US Department of State Medal of Arts Award.

In 2017, a monumental two-part painting, ‘HOWL, eon’ (I, II) commissioned by San Francisco Museum of Modern Art was unveiled as a major, long-term installation in the lobby of the museum. An upcoming survey co-organised by the Los Angeles County Museum of Art (LACMA) and the Whitney Museum of American Art, New York, opens at LACMA in Autumn 2019 and will tour to other major US venues throughout 2020. 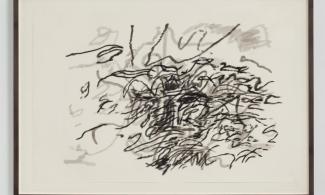