Kettle’s Yard is a unique art collection composed of 1531 artworks and objects. It comprises a historic house that displays the permanent collection, and a dedicated art gallery hosting modern and contemporary exhibitions.

Created in 1957 by Harold Stanley ‘Jim’ Ede, Kettle’s Yard was established as a home to live in with his wife Helen, but also a space in which a wide public (particularly students) could enjoy art in a domestic setting. Ede never described Kettle’s Yard as a ‘gallery’; rather characterising it is as ‘a space, an ambience, a home’. In 1966, Ede gifted the building and its collections to the University of Cambridge. 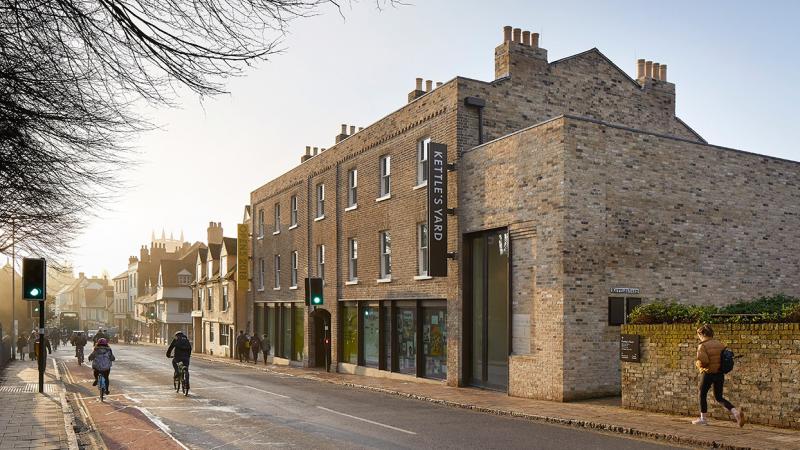 The permanent collection includes twentieth-century paintings, sculptures, works on paper, ceramics and artists’ textiles. Its main strengths are an internationally recognised collection of sculptures and drawings by Henri Gaudier-Brzeska; the largest institutional holding of paintings by Alfred Wallis; and significant holdings of paintings, sculptures and drawings by leading modern British and International artists dating from c.1920 – c.1970, which largely derive from Ede’s close friendships with those artists. They include works by Ben Nicholson, Winifred Nicholson, Christopher Wood, David Jones, William Congdon, Italo Valenti, Naum Gabo, Henry Moore, Barbara Hepworth, and pioneers of international modernism Joan Miró and Constantin Brâncuși. Works by British ceramicists Lucie Rie and William Staite Murray are also contained within the collection. These artworks are displayed amongst, and alongside, furniture, glass, ceramics, textiles and natural objects that are also considered to be part of the permanent collection.

Kettle’s Yard benefits from extensive archival holdings, including large bodies of correspondence with modern artists that are an invaluable resource for researchers studying modern art. Our unique position as a collection and resource for academic research stems, in part, from Ede’s collecting habits. Ede championed artists who were at the early stages of their careers and thus much of the collection represents formative periods in the artists’ creative lives. A large proportion of the collection was also gifted directly from the artists to Ede. 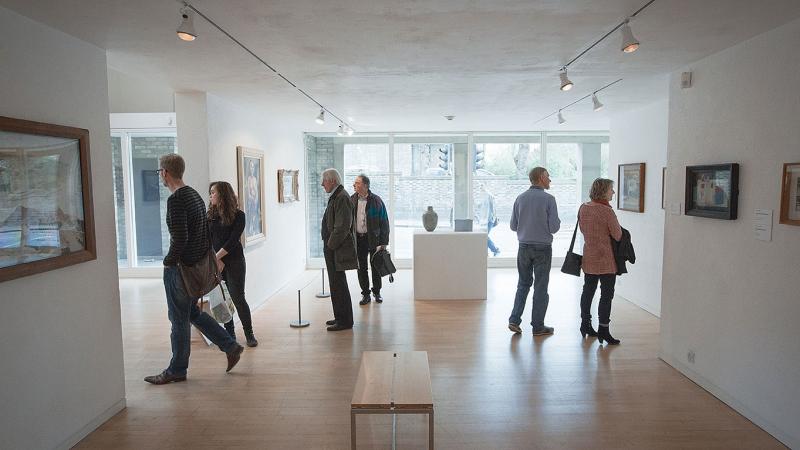 Kettle’s Yard research staff have the following interests and strengths:

Dr Jennifer Powell, Head of Collection, Programme and Research
British and international sculpture of the 20th and 21st centuries, particularly that dating from c.1915 to c.1960; exhibitions cultures and identity constructions in the same period.

A current research project centres on Jim Ede & India
Accompanying the 2019/20 exhibition Homelands: Art from Bangladesh, India and Pakistan, Jim Ede and India is a research project and display presenting new discoveries from Kettle’s Yard and other national archives and collections, encompassing rare correspondence, photographs, art and non-art objects. In Ede’s own words, his service in the British Indian Army and travels across northern India between 1917–19 ‘reverberated’ throughout his life. This display traces these reverberations in his ties with the Indian cultural and political elite in 1930s London, his intimate friendships with TE Lawrence, William Congdon and other expatriates to India, and his lifelong curiosity for South Asian history, geography, politics, culture and religion. 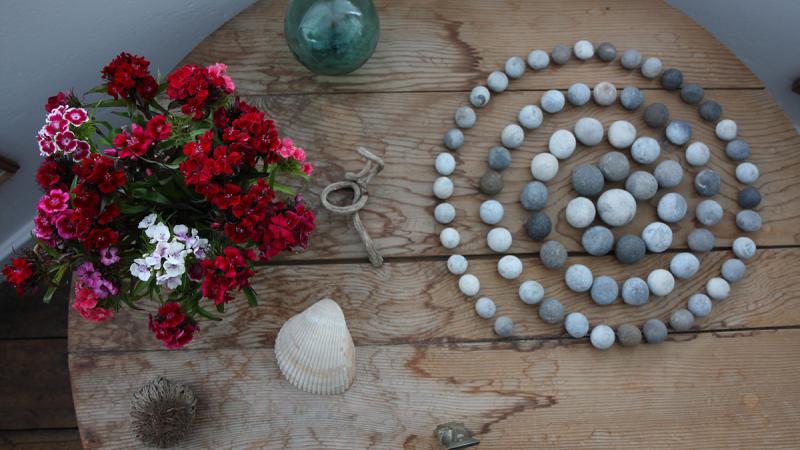 The Modern Home: Art and Design in Britain, 1930–1955
This project would focus on the relationship between the description of the modern home and British modernism. Beginning with Kettle’s Yard as a space in which modern art defines modern domesticity, this project will expand to consider more complex interactions between art practice and design; and discourses surrounding space and light.

Ian Fairweather
Jim Ede was a key supporter of Ian Fairweather following their meeting at the Slade School of Art in 1919. He continued to act as the artist’s mentor and agent during the 1920s and 30s – Fairweather’s greatest period of productivity – and throughout Fairweather’s extensive travels in Australia, Singapore, India, Japan and Indonesia. In spite of this close and longstanding relationship, the Kettle’s Yard collection does not include any artworks by Fairweather. However, the archive holds an important body of more than 50 letters exchanged between Ede and Fairweather from 1928 to 1945.

Casting: Sculptural Histories
Jim Ede is well-known as a ‘friend to artists’: this is taken to describe his generosity supporting artists through correspondence, and financially through his collection, but Ede was also keen to protect and expand the legacies of his artist friends. One means he found of doing this was through posthumous casts of sculptures in his collection, particularly the work of Henri Gaudier-Brzeska, which could circulate in editions to museum collections internationally. Often after an edition had been made Ede would sell the original sculpture and retain a cast at Kettle’s Yard, freeing up funds to continue collecting, or to preserve the collection. Ede’s willingness to create editions runs counter to imperatives that seek to preserve or raise the value of collections through the scarcity and originality of their objects. But this practice also challenges some of the key tenets of Modernist art, which the Kettle’s Yard collection at times exemplifies and at others undermines. This project would both explore the cast collection and its related archives and consider their conceptual implications for Kettle’s Yard and larger narratives of Modernist art.

Queer Museology/Queer Kettle’s Yard
Kettle’s Yard is home to numerous queer narratives ranging from work by artists like Williams Congdon and Christopher Wood, to objects resonating with queer iconographies. Jim Ede, Kettle’s Yard’s founder, was also interested in what we would now call non-normative sexualities and the archive includes his thoughts on love and desire, while his library includes titles by Havelock Ellis and other sexologists of the period. This research project would excavate Kettle’s Yard’s queer narratives, with outcomes including learning resources aimed at different audiences, as well as an academic conference reflecting on queer museology, with a particular focus on the house museum. We are committed not only to telling the queer histories of artists and makers in our collection but also to facilitating discussions of queer art making and museology more broadly. We are developing research projects that engage with different aspects of Kettle’s Yard’s queer heritage.

Kettle’s Yard Anti-Museum
This project would situate Kettle’s Yard in relation to other ‘alternative art spaces’, thinking beyond its status as a ‘house museum’ and toward understanding the Edes’ and subsequent curators’ impact on the production and dissemination of art. Although the exhibition history of ‘alternative art spaces’ has become fashionable, this project looks beyond the artist-run or cooperative space as structures that radically challenge the mainstream and instead looks to longer-term, perhaps quieter, projects that have produced idiosyncratic art histories. The project would begin with Kettle’s Yard and expand to consider Li Yuan Chia’s LYC Museum in Cumbria, Hospitalfields in Scotland and Wysing Arts Centre, outside Cambridge among others.

Found objects / ‘non-art’ objects
The Kettle’s Yard collection includes large numbers of natural and found objects, furniture, china and glassware, textiles, archaeological artefacts and other miscellaneous items that Ede collected and displayed in his home. To Ede, these objects were no less important than the artworks by major 20th-century artists: rather, each individual object was crucial to the overall arrangement, with no hierarchy between ‘art’ and ‘non-art’. In spite of this, research into the collection has significantly privileged the artists and artworks at Kettle’s Yard, with comparatively little information about the other objects that make up the collection. This project would begin by researching and documenting these objects, considering them in the context of the wider collection. It would also explore the ways Ede’s collection fits within the broader context of British and continental modernisms, from the objet trouvé and the ‘Surrealist object’, to the interest in ‘Englishness’ and revivalism shared by many British modernists.

Please allow at least 3 to 4 years in advance.