Violist and director Jennifer Stumm is recognized as one of the world’s dynamic and creative leaders for her instrument, known both for her distinctive sound and unbridled enthusiasm for music.

Hailed by the Washington Post for the “opal-like beauty” of her playing, Stumm appears on many of the world’s great stages, including Carnegie Hall, the Kennedy Center, the Concertgebouw, Sala São Paulo, and the Wigmore Hall, London. Stumm will be joined at Kettle’s Yard by Tom Poster, local pianist and co-founder of our artists in residence, the Kaleidoscope Chamber Collective. He has been described as “a marvel, [who] can play anything in any style” (The Herald), “mercurially brilliant” (The Strad), and as having “a beautiful tone that you can sink into like a pile of cushions” (BBC Music).

Violist and director Jennifer Stumm has blazed a courageous creative path, her diverse projects mixing a searching intellectual curiosity, irrepressible musical enthusiasm and committed advocacy for social opportunity. Known for the seductive power and “opal-like beauty” (Washington Post) of her sound, Jennifer appears on the world’s great stages like Carnegie Hall, the Kennedy Center, the Concertgebouw Amsterdam, Sala São Paulo, and the Wigmore Hall, London. Her solo career was launched after victories in three major international competitions: William Primrose, Geneva, and Concert Artists Guild (where she was the first violist ever to win First Prize) and she swiftly earned a reputation as one of the world’s outspoken voices for the expressive possibilities of her instrument.

Her viral TEDx talk about the viola and the blessings of being different, “The Imperfect Instrument,” was named an editor’s pick of all TED talks and led to a solo debut at the Berlin Philharmonie. Jennifer has released two celebrated solo albums. Her debut recording for Naxos’ Laureate Series featured works by Italian composer/violist Alessandro Rolla, hailed as “an absolutely phenomenal display of virtuoso viola playing” (The New Recordings.) She released her album of Berlioz’s Harold In Italy in 2014 and performed the work in her unique staging and characterization almost fifty times. A recipient of the prestigious BBC New Generation artist and Borletti Buitoni Trust awards for her work in chamber music, she appears at major festivals such as Verbier, Marlboro, Stavanger, Spoleto, Aldeburgh, Delft and IMS Prussia Cove and regularly appears with Spectrum Concerts Berlin. Her collaborative partners have included members of the Beaux Arts Trio, Guarneri, Vermeer and Alban Berg Quartets and the period ensemble L’Archibudelli.

Jennifer is founder and director of Ilumina, the São Paulo-based chamber music collective, festival and social initiative, which has ascended rapidly to prominence as a modern model for 21st century creativity and efficient artist-led advancement of diverse talent. Ilumina unites leading international soloists with the best rising talent from Latin America, working and performing side-by-side in São Paulo at the Ilumina festival and on tour around the world. Jennifer’s flair for curation and stage direction has received much attention, and Ilumina concerts invite listeners to be immersed in dynamic musical worlds, steadfastly committed to interpretation, powered by the freshness and energy of cultural exchange.

The coming season brings her debut at the Barbican, London, turns as concerto soloist in halls from São Paulo to Bangkok, the complete chamber works of Brahms in Milan, and a season-long celebration of female composers honoring the centenary of the Rebecca Clarke Sonata. She will curate and direct a new show of staged chamber music for Ilumina, following on the success of “Final Frontier’ in 2017.

Jennifer Stumm is Professor of Viola at the Music and Arts University of the City of Vienna, International Chair of Viola Studies at the Royal College of Music, London and gives masterclasses around the world. Since her school days teaching strings in the Atlanta inner city, Jennifer has been a committed to a vision for classical music that inspires social impact. She devotes considerable time to supporting young musicians from developing nations, both in person and online. In the first four years of her Ilumina project, nearly 50 young artists have been accepted to study at major international institutions, a powerful reminder that talent never decides where it is born.

Born in Atlanta, Jennifer first heard the viola when she was eight and, enchanted by its sound, began playing in her school’s orchestra. She studied with Karen Tuttle at the Curtis Institute of Music and the Juilliard School, with Nobuko Imai in Amsterdam and also pursued interests in politics at the University of Pennsylvania. 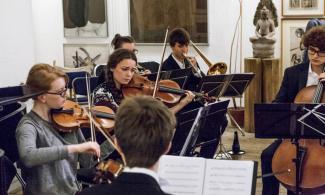