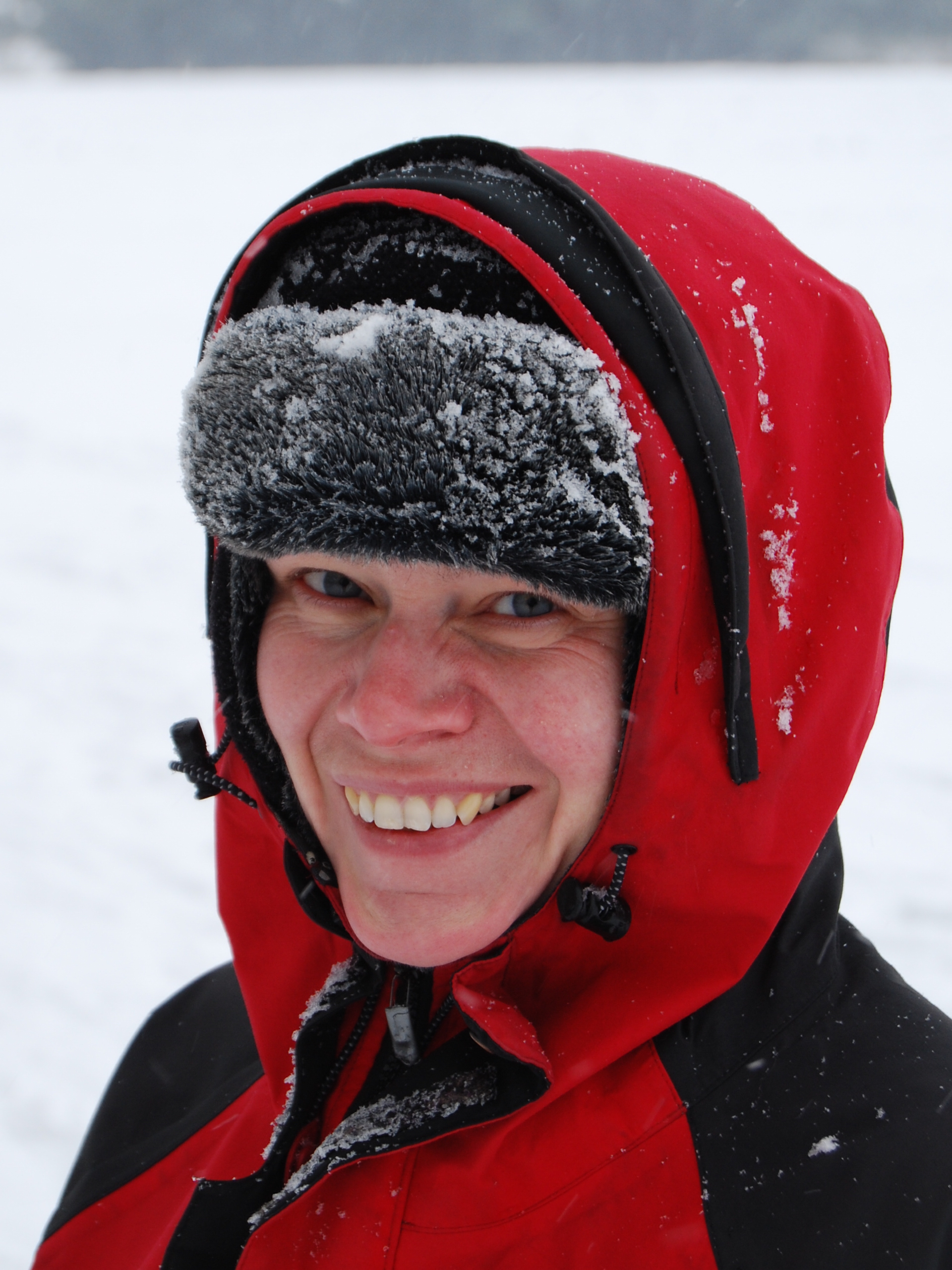 What do bananas and this 1950s compass from the Polar Museum have in common?  Answer – they are both radioactive! Admittedly the compass is a lot more radioactive than the bananas, so it needs to be stored and handled according to the legal requirements of the Environmental Permitting Regulations 2016.  The Polar Museum has 15 radioactive objects in the collection, mainly compasses which have radium paint on the dials to make them glow in the dark.  The Whipple Museum of the History of Science also has 20 radioactive objects in their collection, many of which are quite similar.

Until recently the Polar and Whipple Museums looked after their radioactive collections separately.  But the objects need to be well ventilated to prevent radon building up around them.  The Whipple has not got enough suitable ventilated space in the stores for both their radioactive things and other types of objects which also need plenty of air circulation.  The Polar Museum, on the other hand, has enough well ventilated space for both collections.  The museums actually already share a legal permit to own their radioactive objects and now they have decided to share a single store for them as well.  This is a historic moment for the University of Cambridge Museums as it is the first time the museums have collaborated on a specialist storage facility for objects from two different institutions. 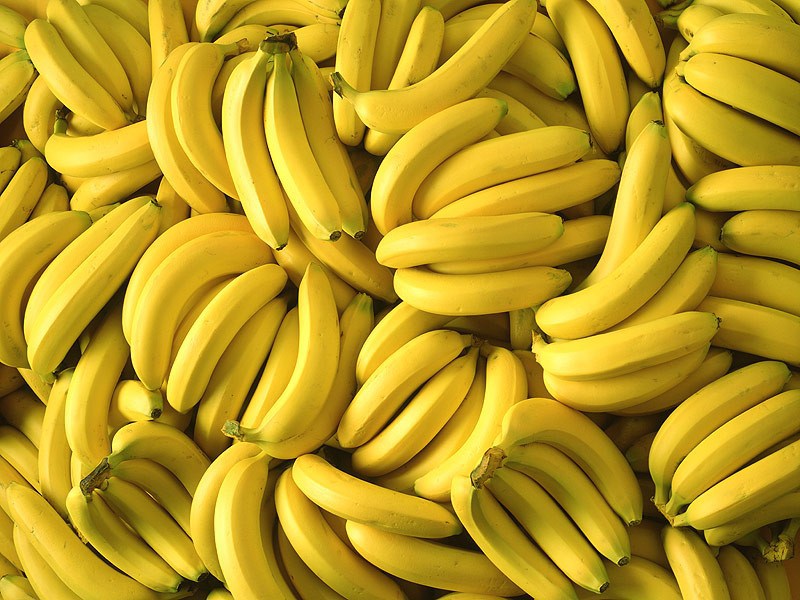 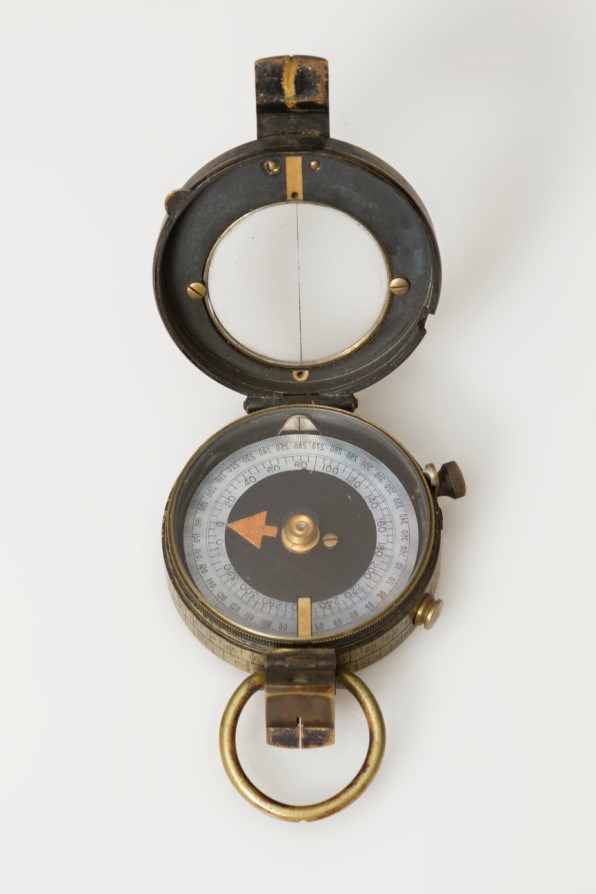 The Whipple objects had to travel to the Polar Museum in a special radiation consignment, as it is illegal to transport radioactive items on public roads without the right paperwork in place (even for just 200m!).  The University Safety Office has been brilliant in helping with the legal side and making sure we all work safely.  Here is the lovely Brain Sullivan from the Safety Office with the Whipple artefacts in a van. 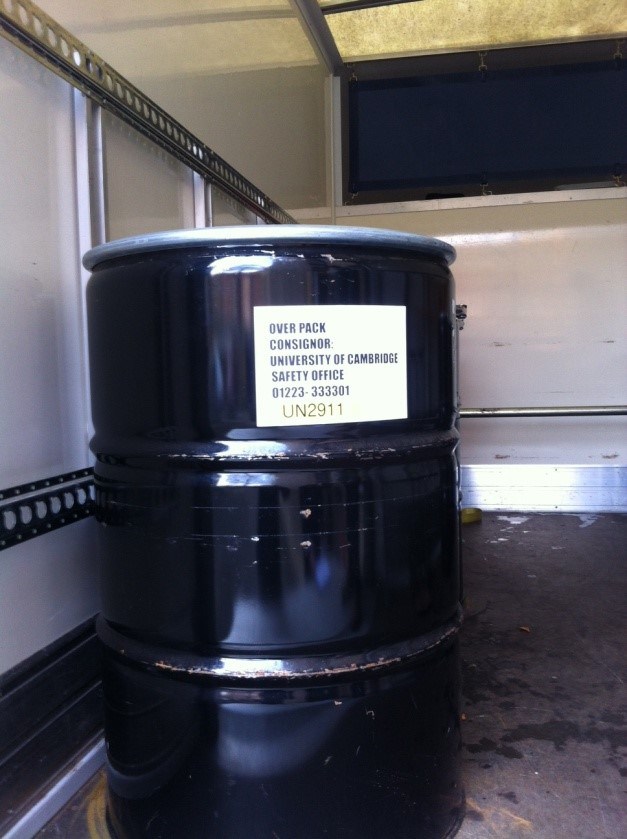 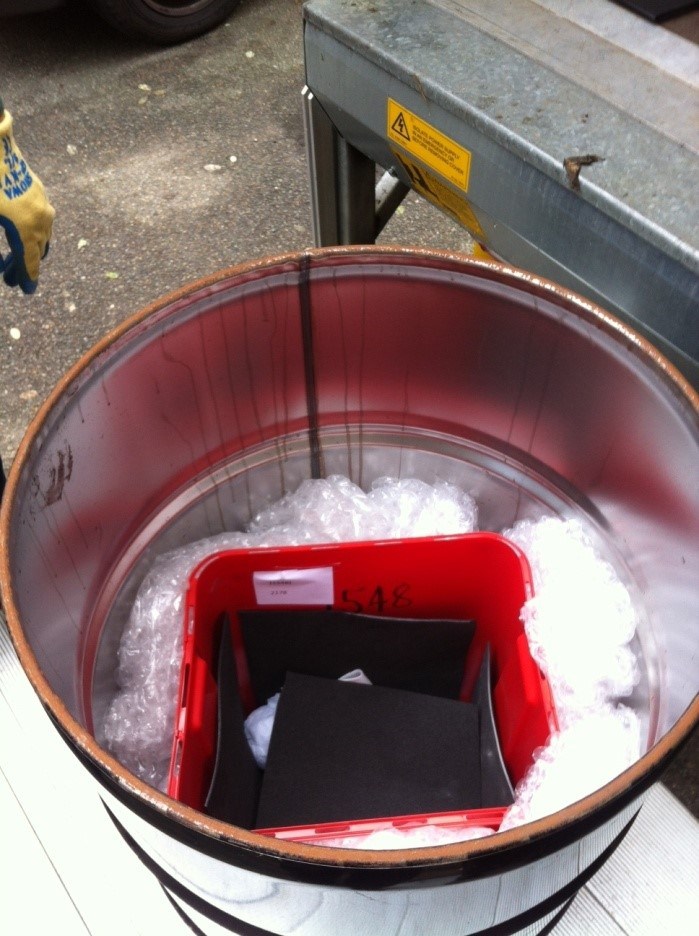 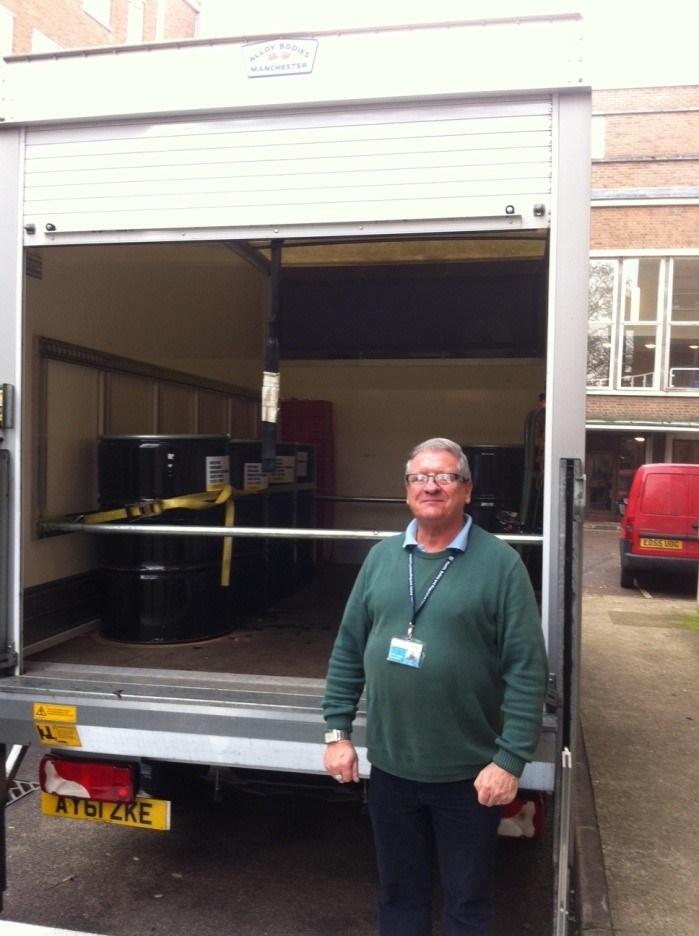 Inside the barrel was another crate, this time a plastic one.  The closer you are to the objects the bigger radiation dose you get, so the crate and barrel system is designed to put space between people handling the packages and the artefacts.

The objects were spread out over 4 crates so none of the containers would give out too much radiation.  Here they are in the Polar Museum basement waiting to be unpacked.

We try and keep the time we spend with the objects as short as we can so all the packaging for storage was ready in advance.  Inside the red crates, the objects were packed in more standard museum packaging – acid free paper and archival foam.  We took the objects out and placed them in padded archival trays.  They are not sealed so that they can get plenty of air and reduce the build-up of radon in the store.  Here is a theodolite and a compass from the Whipple collection. 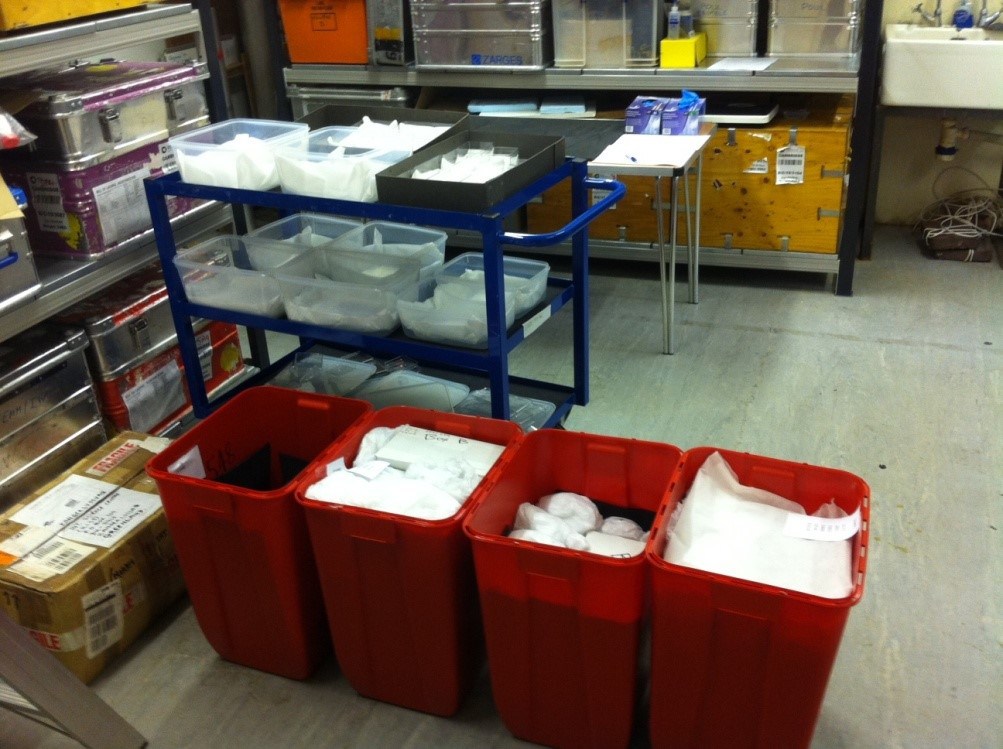 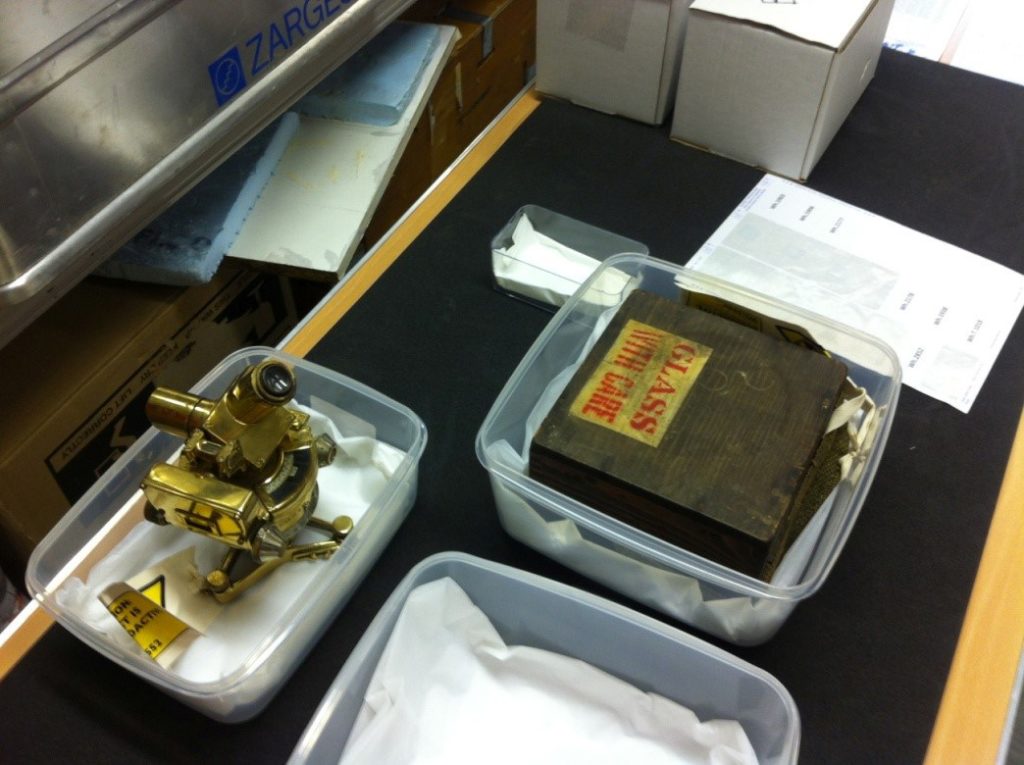 The trays were then stored in the designated radiation cupboard which is under lock and key to stop people accidentally getting a radiation dose. 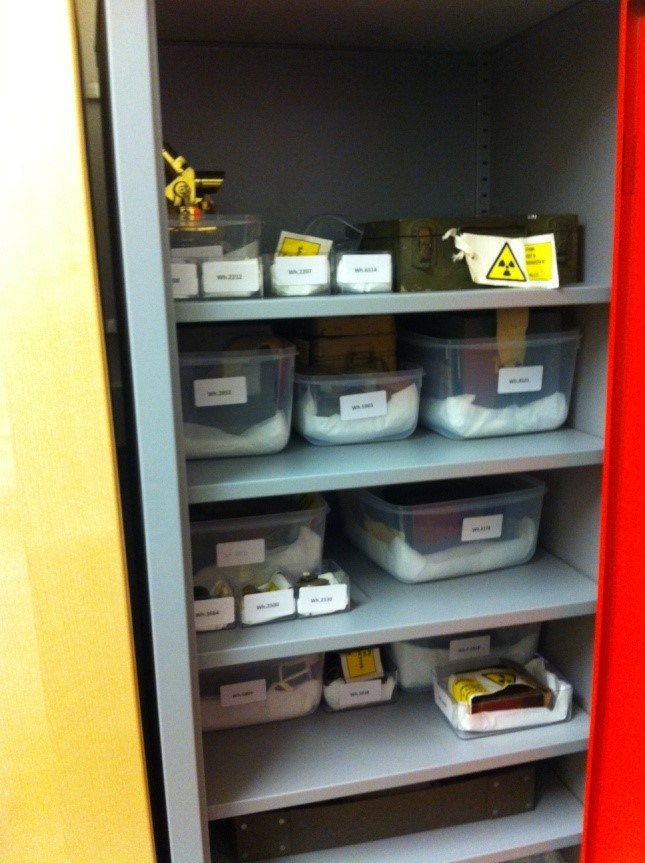 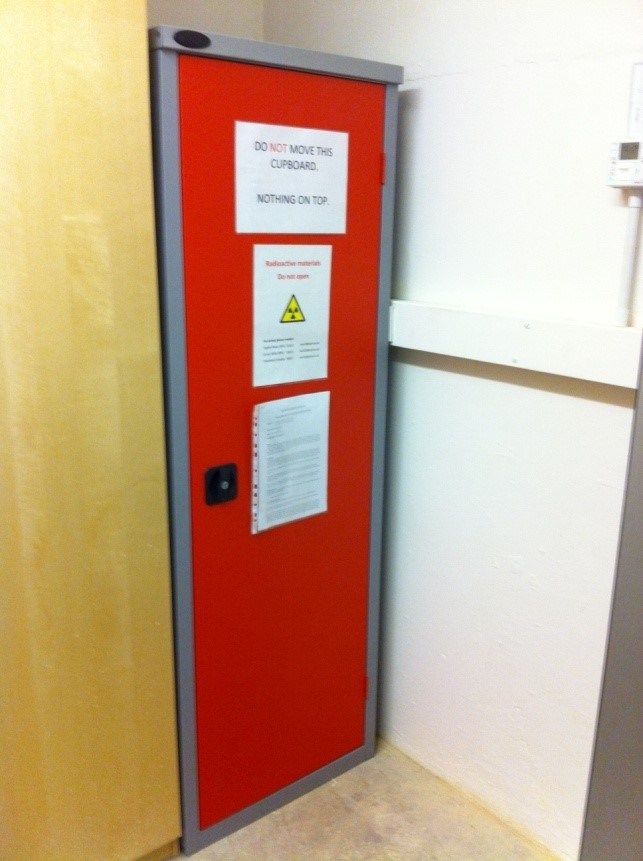 We have a programme of regular monitoring for these collections which will continue in the combined storage cupboard.

Although this is just a small group of objects it is very exciting to work together in a new way, and with luck this project will pave the way for more shared specialist storage facilities in the future.

Do you ever feel like you’re being watched? A pair of eyes amongst the bracken, a shadowy silhouette in the moonlight, the Queen of England on your toast? The phenomenon is called pareidolia: the product of a paranoid brain. Human minds are constantly searching for patterns and meaning in the world around them; sometimes seeing a face in the trees… Read full article