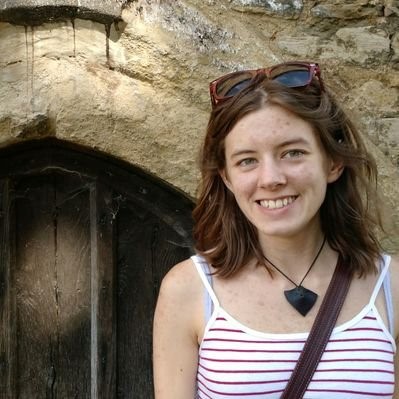 by Lily Stancliffe
Education Intern, Museum of Archaeology and Anthropology

Do you ever feel like you’re being watched? A pair of eyes amongst the bracken, a shadowy silhouette in the moonlight, the Queen of England on your toast?
The phenomenon is called pareidolia: the product of a paranoid brain. Human minds are constantly searching for patterns and meaning in the world around them; sometimes seeing a face in the trees is the difference between life and death – but often it’s just fun.

When you come face-to-face with an early medieval object, chances are that you really are face-to-face! Early medieval objects play with perception, weaving people and animals together to create a rich and complex ornament full of mystery and tricks of the light. Look and look again; what you saw before has shifted and transformed. These artefacts are never static and they demand an audience for their magic.

Sometimes called Salin’s Style 1, this kind of decoration is better described by its nickname ‘animal-salad’.  A kind of language exists for these types of objects, consisting of a fairly narrow vocabulary that has been used to ‘write’ hundreds of different stories. When you speak the language, the same cast of characters can be made out on brooches produced generations apart, and on opposite sides of the country. As an early medieval person living in England in the sixth century, there were things you would expect to see on a pair of wrist clasps, a disc brooch or great square-headed brooch, particular creatures who belonged in that environment and were waiting to be discovered if you looked hard enough.

Look at the wrist clasps more closely. Picture something like the Sutton Hoo helmet: with a defined brow ridge, nose guard and cheek guards. 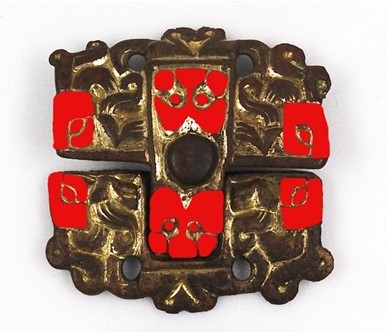 That’s what we’re seeing here, two helmeted faces looking straight out towards us, and four in profile. Human faces appear on all sorts of early medieval objects, often wearing these types of helmets but other times sporting impressive, curling moustaches.

So far so good but from here, it all gets a little weirder… 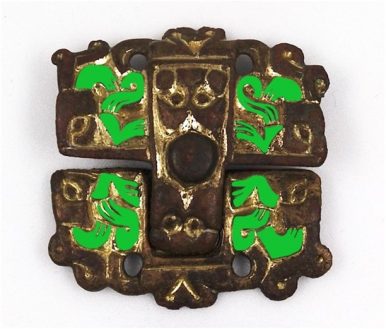 The gilding has highlighted these disembodied limbs, each jointed and with three toes or claws. What kind of creature did these belong to? Are the feet webbed? Are they all from the same animal? These are often depicted in groups of four, suggesting that we’re dealing with a four-legged, three-toed beastie. These wrist clasps are in good condition but a thousand years of wear has made it difficult to tell exactly how many limbs we have to work with here. 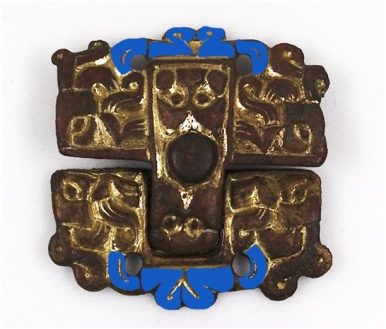 A particularly good animal salad has one final ingredient: beaked beasts. On the rear edges of the clasps, I see two pairs of birds with necks curving in towards each other, like swans. On either side of these pairs is a large, curved beak in profile. Sometimes the beaked creatures on these objects are depicted with bodies. There are also lots of examples where they appear to be part human and fused with helmeted faces. Are these creatures in transition; people becoming birds? Or are they hybrid beings or elaborate animal masks?

Now that we’ve flushed these strange creatures (animal? human? monster?) out of the metalwork the adventure really begins. We can start to think about the environment they lived in, often pinned to the outermost clothing layers, close to the face of the person who owned them. These were objects that were meant to be seen. What we wear, and how we choose to wear it, helps us to communicate things about ourselves to the people around us.

Each one of these objects contains a world full of movement and magic. These are not observational works of art but representations of a very specific kind of story, one which we cannot hope to reconstruct from such a great distance of time and culture. But, with a little bit of patience and imagination, we can imagine new stories for this cast of characters and maybe share a secret or two with the people of the past.

You can uncover more of these mysteries by exploring the online collections at the Museum of Archaeology and Anthropology.
You could start with the object featured: 1948.1313 A, 1948.1331 or 1948.1569. Or try searching for ‘Style 1’, ‘Zoomorphic’, ‘Square headed’, ‘Disc brooch’, and ‘Wrist clasp’. Look for faces, feet and beaks.