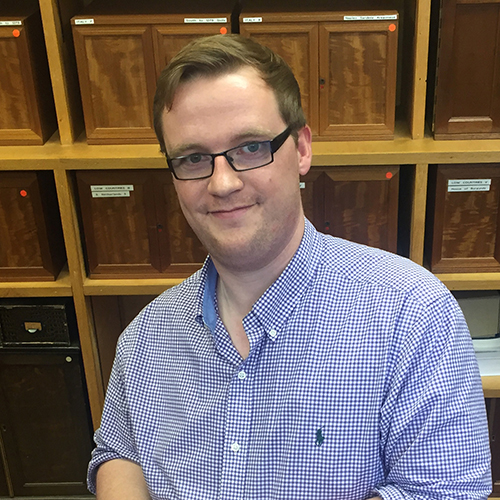 by Will Wilson
Front of House Host, Fitzwilliam Museum

In this volunteer role I have primarily been involved with the cataloguing of Great British coinage dating from the reign of Queen Anne onwards through the Hanoverians.

This work is part of an ongoing project within the Department of Coins and Medals at the Fitzwilliam Museum to ensure all records are as detailed as possible, to facilitate their future use in exhibitions, research, and other forms of interaction with the collection. The Museum’s collection of Early Modern British coinage is of very high quality, but often receives less public or scholarly attention than earlier material. Volunteering on this project has been incredibly enriching, allowing me to develop skills acquired during my undergraduate and master’s degrees in archaeology, as well as entirely new ones. Although I am familiar and comfortable with the medium of coinage, this period of British history is not something I consider a speciality. As a result of this project, I have developed a deeper understanding of the period and the use of coins as a political medium. During my master’s degree, I developed a deep interest in theoretical numismatics during the Iron Age and Roman period in North West Europe, primarily in Britain. In this way it has been phenomenally helpful to develop my skills in applied numismatics to marry with this specialism. From this project I have gained a better understanding of object handling, identification, and the collection of metric data (weights, diameters, etc.).

The manner in which collections, and the information we store on them, can be used by incoming researchers and the public has in many ways been at the centre of my work. This role has introduced me to some of the many complexities of collections management in a large museum like the Fitzwilliam, as each loan, bequest and gift (which can number in the hundreds or thousands of coins) has to be properly recorded, acknowledging its donor and provenance. The department’s collection of coinage from the reign of Queen Anne onwards (the focus of my project) is generally in very good condition – many of the pieces are proof specimens of the highest quality. This has allowed me to really get a grasp of how best to identify coins as part of a step-by-step process. The handling of these objects in a museum context (as opposed to the archaeological one in the field) has been illuminating. Again, when compared to the material I have worked with previously, the high quality of the collection is new to me. The excellent condition of most of the coins in the collection has enabled me to work through them in a rapid and methodical way; mint-state coins are far easier to identify using a standard catalogue than Roman ones covered in soil! Overall, the skills and experience I am gaining through my time with the department has encouraged my enthusiasm and skill base to a point that I now feel confident in working with coinage in any museum or heritage setting. The Coins and Medals staff I work with have been an absolutely fantastic support network, happy to share their considerable knowledge of the subject with me.

Speaking as both a long term visitor to the Fitzwilliam, a part-time Front of House Host and a Volunteer in the Department, the handling of this material has brought me closer to a collection which I am deeply passionate about.

Please do share this post, ask staff as many questions about the collection as you can (they are often a goldmine of information) and come and connect with the collections as a whole.