It’s a tiny object, but it made big headlines this month. The Trumpington Cross, an extremely rare piece of Anglo-Saxon jewellery, was excavated in 2011 at Trumpington Meadows just outside Cambridge. Now the landowners, Grosvenor, have gifted it to the Museum of Archaeology and Anthropology (MAA), where it’s on display.

The cross was discovered in one of the earliest Christian burials in the UK, dating to around the middle of the 7th century AD. Its owner, a teenage girl, had been buried in an extremely rare ‘bed burial’: laid to rest along with treasured possessions in her own bed. We caught up with Senior Curator Jody Joy to find out more about this remarkable discovery and what it means for MAA.

Hello Jody. Thank you for making some time for us in the middle of all the press attention. Can you tell us a bit about what the cross is made from?

The cross is made from gold, inlaid with garnets. The garnets probably come from Asia. It is exquisitely made as the garnets are backed with foil to make them shine and catch the light. Gold always amazes me as it doesn’t change – the cross came out of the ground pretty much as it looks now (once some of the mud had been removed).

How big is it? And how would it have been worn? 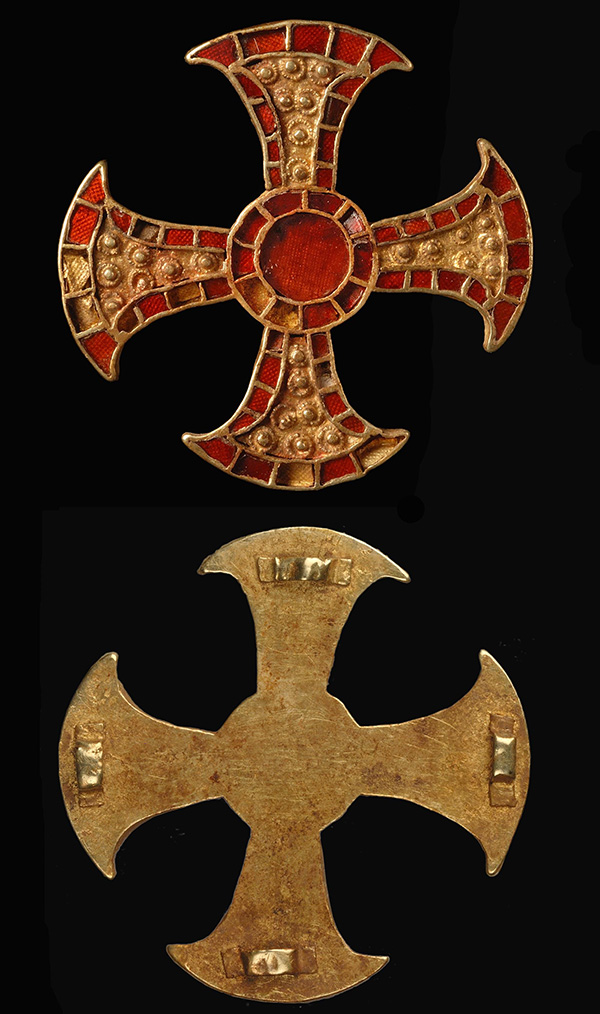 The cross is tiny – only 34mm in diameter. It has four loops at the back and was possibly worn at the chest, sewn directly onto clothing or suspended as a pendant from one of the loops. The gold and garnet pins also found in the grave were probably used to secure a veil to the costume. Although small, the cross would have certainly caught the eye. Unlike many other Anglo-Saxon jewellery, which can be large and brash, the cross is small and subtle but no less impressive.

Can you tell us anything more about the girl it was buried with?

She was a teenager, probably aged around 16 when she died. We don’t know exactly how she died but we know from her bones she suffered from relatively poor health at some points in her childhood.

You’ve described this find in the press as being ‘of international significance’ – can you tell us why?

Only five other similar crosses have been found in Britain so it is a very rare object. The ones that are known were found in association with high status women and in one instance a bishop, so the highest levels of society. The use of gold and garnet to make the cross is similar to objects found in the (earlier) Sutton Hoo burial and can therefore be linked to aristocracy not just a local elite. In a sense it was surprising to find the cross in a grave at Trumpington, which excavations showed was a typical Anglo-Saxon settlement for the time.

We understand that the Anglo-Saxon site at Trumpington was completely unknown before the recent excavations. How does the discovery of an Anglo-Saxon cemetery near Cambridge change our understanding of our region’s early history?

Because of the associations of the cross and early Christianity, the discovery of the small cemetery at Trumpington reveals some of the earliest Christians in the region and some of the earliest in the country. As I mentioned, the Anglo-Saxon settlement at Trumpington is pretty typical but individuals living there had much wider connections and may have been influential in the formation of the early church in England and the process of Christianisation.

What does it mean for MAA to have the cross in the collection?

We are absolutely thrilled to have the cross at MAA. It is a find of international significance found just three miles away from the museum, which means that local people are able to see it. It also allows us to tell many different stories in the gallery, such as the story of early Christianity in the region and is great in terms of schools and education.

Are you surprised by all the press attention? (The cross has featured in the Guardian and BBC among others.)

A little, as we are a relatively small institution, but it’s such a lovely object and given the story of the find – related to a teenager, buried on a bed – maybe I shouldn’t be surprised. My wife even noticed a story about it in the Belfast Telegraph!

What are you displaying it alongside, and what stories does it enable you to tell?

The cross is displayed alongside the pins and the metal fittings of the bed, which allows us to tell the story of the cross, early Christianity, the significance of a bed burial and with maps and plans, we can explain how local the find was.

Thank you, Jody! He was too modest to mention this, but his book A Celtic Feast: the Iron Age cauldrons from Chiseldon, Wiltshire (co-authored with Alexandra Baldwin) has been nominated for Current Archaeology‘s Book of the Year. We wish him the very best of luck.

See the Trumpington Cross on display at MAA now.